A and I signed up for a three day 4WD trip across the high plains, which would take us from San Pedro de Atacama, Chile and drop us in Uyuni, Bolivia. On the way, we were promised spectacular views of the Andean altiplano landscape; mountains, lakes, rock forests and even flamingos. The rave reviews we had heard from other travellers only cemented our determination to see this place.

We left our hostel early, sometime around 7am, and found ourselves waiting outside the tour offices in freezing temperatures. It may have been the desert but until the sun rises, you may as well be in the Arctic. It was slow-going that morning; delays at the tour office and then again at the Chilean immigration post meant we didn’t really get going until after 10am. The first part of the journey was uneventful, most of the time was spent staring out the window at the ever-changing landscape. As we climbed through the highlands, I again felt the effects of the altitude and prayed it was not going to ruin my trip.

After half an hour or more we came to the Bolivian immigration post. Set amid rock and snow on an icy Andean slope, the post was little more than two basic rooms, all cement and no heating. I did not envy the officers assigned to this location, but then the view from their office window was spectacular. In a nearby hut, breakfast was served. I made a beeline for the hot chocolate, more for the opportunity to hold something warm in my hands than for any true desire to drink. After breakfast our Chilean driver introduced us to Martin, our Bolivian driver, and then bade us farewell. Passports stamped, visas in place, Martin ushered us on to the waiting 4WD. The morning delays at the Chilean immigration post had put us decidedly behind schedule and Martin was eager to get going.

The day proved something of a whirlwind tour of the altiplano as Martin tried to make up time. Our first stop was the entrance of the Reserva Nacional de Fauna Andina Eduardo Avaroa  where we paid our entry fee and took a short walk to the Laguna Verde (Green Lake). Sitting at the foot of volcanoes Juriques and Licancabu, the lake was a shimmery pale green color. It was mostly frozen – but I am told that in summer, when there is less ice, the water turns a bright emerald color.

Back in the car, we sped across the Dali Desert (so named because the rock pillars there resemble those depicted in the paintings of Salvador Dali), skirted the Laguna Salada and came to a stop at the thermal baths of Polques. Here Martin invited us to take a dip in the baths.While some brave souls did just that, I just didn’t fancy stripping down to my bikini and trotting across the frozen ground to have a soak. 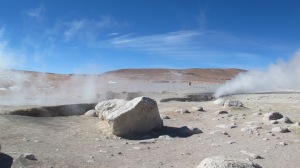 Back in the car, one more photo stop at the Sol de Mañana Geysers, and then we pulled up to our accommodation for the night. It was again very basic; all cement and no heating. In the late afternoon as the shadows grew long, I began to wonder just how cold the night would be. We were now 4800m above sea level – the highest I had ever been – and I was genuinely struggling with the altitude. My head was pounding – despite taking painkillers – and I couldn’t think straight. A and I did break out the cards and attempt a game of memory, but even that was too hard for my slightly addled brain.

I went to bed right after dinner, but not before thoroughly preparing myself for the cold. Dressed in thermals, a fleece, tights, socks, gloves a scarf and a hat, I slid into a sleeping bag and then piled six blankets on top of me. Though it doesn’t seem possible, I was still cold that night. I lay drifting in and out of sleep for hours, every so often rearranging my blankets in the hope they would somehow magically become warmer. They didn’t. I asked Martin in the morning how cold it had become the previous night. Around -15 degrees, he told me. Figures. 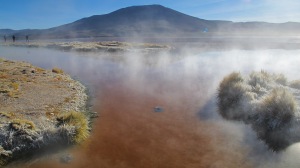 The second day was less hectic. Our first stop was Laguna Colorada, so named because it is red. Yes, red. An impossible but unmistakeable shade of brick red. We spent some time walking around the lake and the frozen tundra, and gazing out at the water and wondering just what was behind this natural phenomenon. Light-sensitive phytoplancton, if you’re wondering.

Another hour in the car and we came to the Arbol de Piedra (Stone Tree), a pyramid shaped rock that seems to have literally grown from the earth. Around the “tree” a variety of equally surreal rock formations.

Back to the car and then on to the “Route of the Jewels”, a set of three lakes strung out across the altiplano. The lakes themselves are stunning, often reflecting mirror images of the Andean peaks which rose behind them. Aside from their obvious beauty, there was a second attraction to these lakes; flamingos! 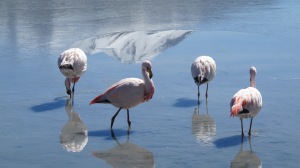 Stalking gracefully through the lakes were hundreds of these pale pink birds. We watched from the shore as they waded through the shallows, their heads bobbing above and below the surface as they fished for food. We followed the flamingos for quite some time, waiting, cameras poised for that perfect shot. Most of the flamingos seemed to prefer keeping their heads underwater, but one or two obliged us.

I had been told there would be flamingos, but then I was still surprised and just a little bit delighted to see them. Curious too. What the hell was this tropical bird doing in these freezing conditions?

We drove on. It occurred to me that despite spending the best part of two days in a car, looking out the window, I was never bored. Not once. The landscape was continually evolving. At one point the pale rocks and dunes convinced me we were driving on the moon, at another point the rough red craters and rock pillars suggested we were on Mars. The altiplano was often otherworldly, but it was always beautiful.

That night we slept in a hotel made entirely from salt. The walls were made of bricks cut from salt, the furniture was carved from salt, the floor was covered with ground salt. The window of our room looked out on the white stretch of the Salar de Chiguana, a smaller salt flat that hinted at what was to come. It was something of a novelty, and one which I mos definitely enjoyed.

The second night I was again worried about the cold. A, bless him, found some extra blankets and literally wrapped me in them before throwing more blankets on top. That night was much better, I did in fact sleep.

The morning was clear and blue, a perfect day for visiting the salt flats. Our first stop was a small rocky outcrop, Isla del Pesdadores. Sitting by itself in the salt flat, the island is home to nothing but giant cacti and a few llamas. Scrambling up and around the island, we found some great viewpoints from which to look out on to the flats.

The Salar de Uyuni is the largest salt flat in the world, spanning 10,500 square kilometres. But the figures don’t tend to make much sense, until you are actually out there. In the salar proper, the brilliant white flats stretch out to the horizon and beyond and you simply can not see the edge. Against the blue altiplano sky the flats are stark, immense, overwhelming almost.

I paced around the flats, marvelling at the flat cracked surfaces. And yes, I did actually pick up some of the white crystals and lick them. I couldn’t help myself, I just had to. They tasted like salt. And then of course, the flats made for some really fun photos. 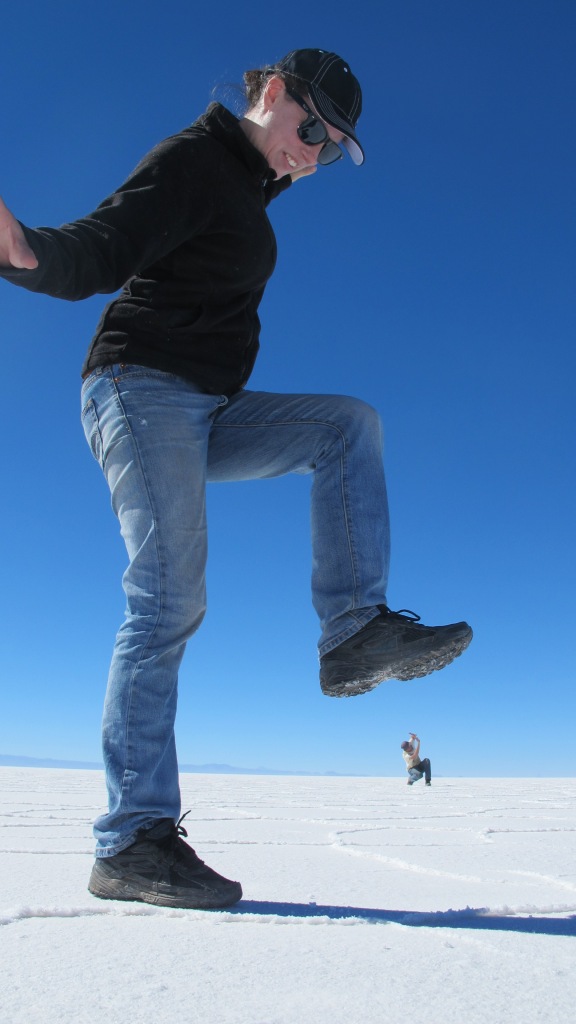 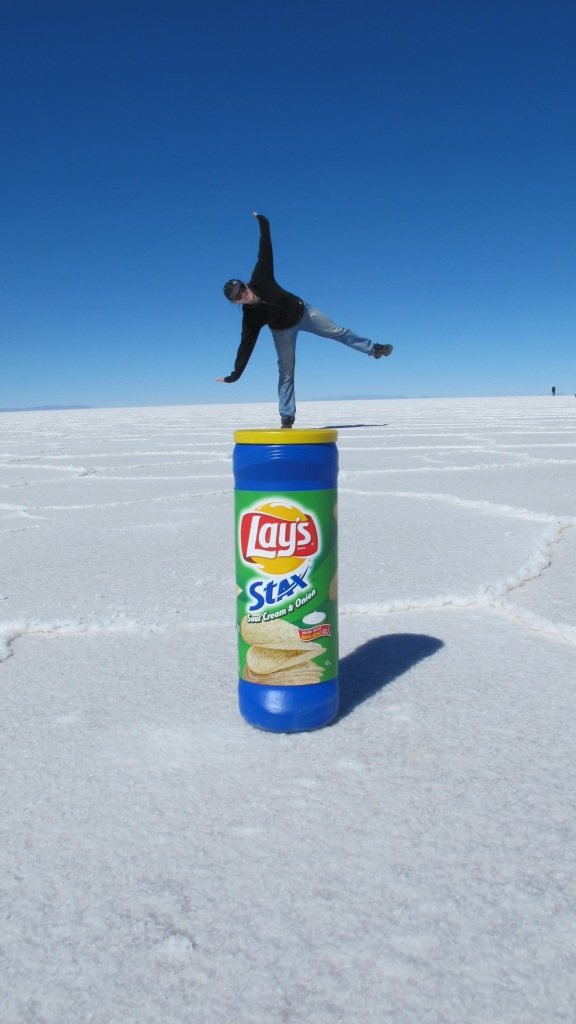 The Salar de Uyuni was just astounding, and the clear highlight of the trip. I should say it was the highlight among a string of natural treasures hiding in the rugged altiplano. This landscape, though rugged and unforgivingly cold, is without a doubt one of the most beautiful and exotic places I have ever encoutered. After seeing it, I don’t know why the guide books don’t rave more about it, why the salar isn’t the number one tourist attraction in South America. All I know is that no itinerary to South America is complete without it.